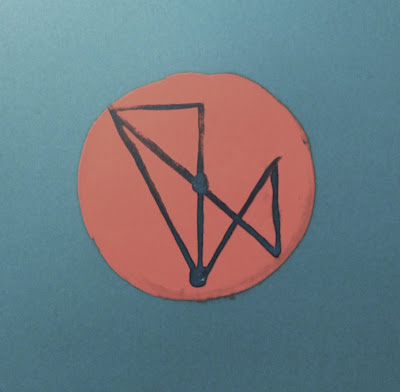 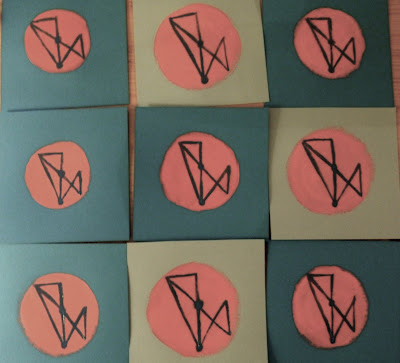 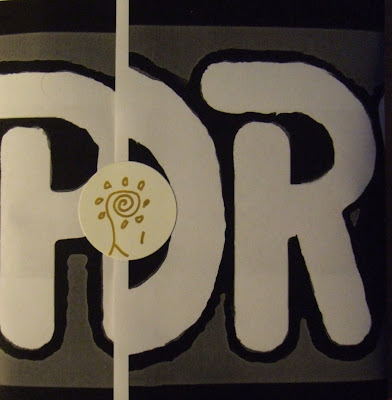 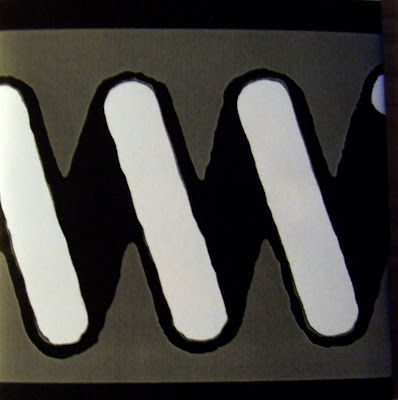 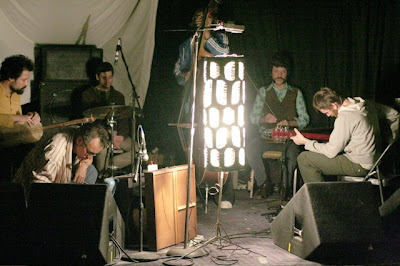 DRMWPN started as a town and country side-project in
2004 and has been growing ever since.
It has always been understood that DRMWPN are playing a
tune but that keeps getting more and more open as the
group grows. The Brion Gyson Dreamachine has always
been the focus onstage.

Apollolaan are very proud to release "Bright Blue Galilee" by DRMWPN. The cdr is the first ever release by this incredible band. The recording is just over 36 minutes long and out now in an edition of just 50 hand painted copies, using acrylic and ink on card and housed in a plastic wallet.

The line up for DRMWPN on this recording is :

The above photo was taken by Robert Loerzil

Okay, let's now move on to the review section of this Drudion. I'll commence with the most useful release of the month, which must surely be the transcendentally tripped out witterings of BRIGHT BLUE GALILEE, a single 36-minute epic by the American ten-piece ensemble Dreamweapon (aka DRMWPN). Available on the forward-thinking UK label Apollolaan Recordings, Dreamweapon utilise their vast arsenal of percussion, keyboards and strange string instruments to enslave the minds of listeners, dragging them down into the underworld via a series of ever-unfolding phased vocal chants, in a similar manner to Valley of Ashes' massive triple LP, the more vocal heavy side of Sunburned Hand of the Man and PARADIESWARTS DÜÜL-period Amon Düül. As so many contemporary musicians attempt to perform similar music to Dreamweapon, such stuff can be judged only by how often the listener needs to engage with it; that I've been compelled to rotate this sucker endlessly is surely evidence of its extreme success. Bless you for birthing it, ladies'n'gennelmen! Score this essential motherfucker from Volcanic Tongue (www.volcanictongue.com).

"First available evidence of Drmwpn (aka Dreamweapon), this Chicago-area free-drone ensemble that features Steve Krakow aka Plastic Crimewave alongside members of Town & Country and various local scene players like Michael Zerang et al. The sound is deep, slow-moving and beautifully brain-erasing, with aspects of AMM, Pelt and The No-Neck Blues Band as well as Spacemen 3, Velvet Underground, LaMonte Young et al. Comes in an edition of only 50 copies in wraparound sleeves."

Featuring a host of ethnic instruments, plus electronics, guitars, drums, bass, etc, “Bright Blue Galilee” is another extended piece that is given plenty of room to grow and change, the result crackling with vitality, reminding me work by United Bible Studies. With rattled percussion and chanted vocals, the piece has a spiritual dimension at its start, the very psychedelic sound encouraging you to turn off the lights and listen completely. Having drawn you in however, the music is slowly absorbed into a different piece and you find yourself listening to drifting electronics and scattered drums, not completely sure when the music changed, but enjoying the effect it is having. Finally the music flutter and stops and you realise half an hour has passed in the blink of an eye or a thousand years, such is the power of this compelling sound.