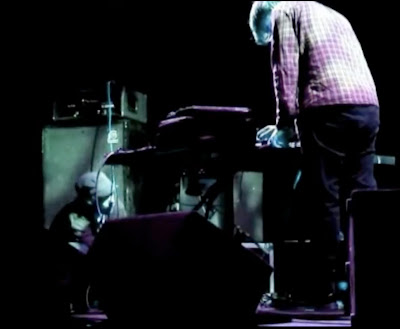 Akke Phallus Duo is the one-year-old configuration of Jon marshall (The Hunter Gracchus, Le Drapeau Noir, Singing Knives Records, Vampire Blues) and Ben Morris (Chora, Le Drapeau Noir). Since meeting in 2005, their sonic paths have crossed most notably in the octet Le Drapeau Noir. Apart from guesting in each other’s mainstay projects they had yet to play as a duo.
AP Started as a process of exchange and abandonment of authorship, they swapped recordings, the only rule being the recipient can do whatever the sound inspires in them to do. The gathering of material has taken them through many solo improvisations with broken instruments (subsequently deconstructed and reconstructed), on acousmatic poaching trips to Italy and Croatia, vocal/running/recording endurances through Peckham at night, and absurdly basking in the heat/sonic waves of an upturned US military tank in static motion…
They have since communally honed a series of recorded compositions. Terroir pissoir is their first release...the first Phase.

"Great new all-improvised junk ritual and ethno-blurt from the winning duo of Jon Marshall (Hunter Gracchus/La Drapeau et al) and Ben Morris (Chora/Le Drapeau Noir et al). A little more over-loaded than any of the players’ previous outings, this has almost a Futura/Red Records ‘feel’, with the kind of odd percussive miniatures, contorted almost-jazz and convulsive vocalese that would situate it somewhere downwind of Jac Berrocal w/aspects of the more ferocious passages of Richard Youngs’ Festival or even Flower/Corsano factored in. There’s a tactile, hands-on quality to the jams that is well beyond the usual improv furniture-polishers and if the sound of swallowing your own tongue makes you a sound-poet then these guys are friggin Lettrists. A great set that mixes psych, bandstand rocking freedom and hands-on DIY ritual to maximal psychoactive effect. Edition of 100 copies."
David Keenan (Volcanic Tongue)

"These saucy guys are Jon Marshall who also stars in The Hunter Gracchus, Le Drapeau Noir, Singing Knives Records, Vampire Blues etc and Ben Morris from Chora and Le Drapeau Noir. Here the two experimentalists’ swapped recordings with each other and the remit was they could do what they like to each others recordings. Sounds like some fun could have been had! Essentially there’s some strange squealing vocals, ethnic sounding instruments, some distorted business and a whole load of clattering. A lot of clattering in fact!! It’s a cathartic listen and one which I suspect a lot of people would struggle with. But there’s plenty of people out there who love things a bit mental and freeform and those people should check out this crazy bunch of random noises instead of watching something shit on telly which is probably all you’d end up doing. Widen your periscope people and stop being so lazy!"
Phil, Norman Records