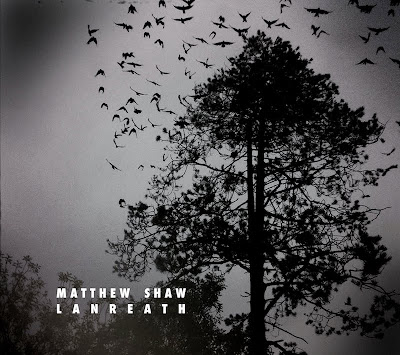 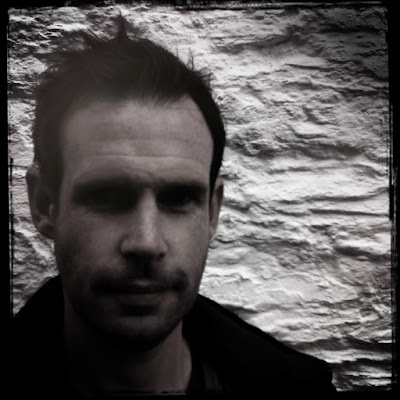 "Lanreath" is a brand new full length piece by Matthew Shaw. Released in an edition of 100 copies of pro manufactured cdr in a digipak cover.
"Lanreath" was recorded this summer in the small village of Lannreath in Cornwall. The cd is Matthews audio take on Lanreath, making music and using sound from the village itself. This release follows the likes of "Metherell" on Sonic Oyster Records, and also "The Four Zoas" on Siren Wire editions. Almost 50 minutes of music, a continuing exploration and meditation by Matthew on the sounds of a single place. Most of the sounds here we're created with guitar and also using processed and unprocessed field recordings. The photos that make up the packaging we're all taken on the days of the recordings.
"Lanreath is a small village containing some beautiful old buildings, a pub and small community shop. It formed the perfect bass to disappear into sound, to meditate on the spirit of place with excursions to the nearby Duloe stone circle for inspiration (and whatever else unknown and unseen) that may have influenced of affected the sounds and recording process"

"It could reasonably be argued that to truly distill the essence of a physical location into sound is perhaps one of the key challenges for a great musician to adopt, doubly so when the artist in question does not make use of lyrics to convey the location or evoke striking imagery, but rather instead opts to make use of a palette of experimental guitar sounds and field recordings.

This task Matthew Shaw undertakes with Lanreath, an album based on the experiences, sounds and the atmosphere he felt while visiting a small village in South East Cornwall from which the work derives its name. Though not personally acquainted with the village in question, it was very easy for this listener to listen and immediately get lost in the romantic lure of that ancient area of the British Isles.

The Dorset based Shaw opens the roughly 45 minute long piece with field recordings and these remain the focus of the remainder of the release, interspersed with long droning strings and haunting harmonies. The work is very well mixed and smaller details of the captured sounds seem to come to the fore at the most opportune moment. Indeed, something of the way in which Shaw commands the atmosphere he captures brings to mind the talented Richard Moult, though the two artists are quite far apart from each other in method and it should be noted that Shaw moves in firmly his own direction.

Lanreath then, is a work which serves both as a fitting homage to the village of that name and a fine testament to the artists’ own sensitivity and skill at making a heretofore unfamiliar village seem so very alluring."

"Beautiful nocturnal drone scored for guitar, field recordings and ‘phonography’ by Matthew Shaw, a collaborator with Brian Lavelle and Andrew Paine and head of Apollolaan Recordings. The guitar is extremely delicate, no more than a distant hovering drone that gives off clouds of subtly shifting microtones that sound like the sun coming up in slow motion while field recordings of birds and spatial resonances add to the feel of night into dawn. The album was recorded in the town of Lanreath in Cornwall and is intended as an attempt to capture the area’s specific sonorities. A great occult drone working that should appeal to fans of Andrew Chalk, Coil, Darren Tate et al. "

...according to our Phil on 20 October 2011.
We’ve had a few CD’s in lately by Matthew Shaw on labels such as Sirenwire and Sonic Oyster. Here’s one on his own label Apollolaan. Why have a label if you can’t release your own music eh? This is his ‘audio’ take on Lanreath which is a small Cornish village (population 514 in 2001) so don’t expect massive boom raves and that if you’re off there! This is a blissful sounding 47 minute drone piece which will evoke feelings of the countryside and the like as it’s got a pastoral vibe running through it... But that could be all the birds twattering on in the background which totally took me by surprise (I thought they were in the room....). It’s warm evocative drone music which is extremely well done. Having never been to Lanreath I can’t say if it would remind me of it but listening to this I’d be more than happy to pop down and mince about for a bit. 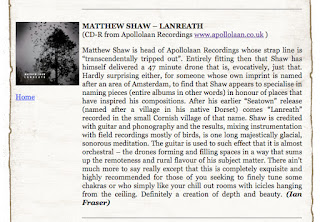