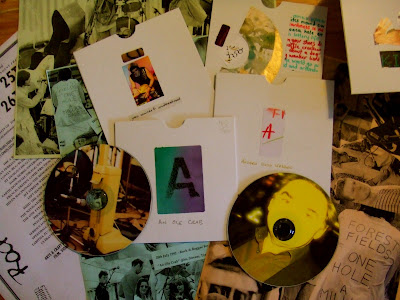 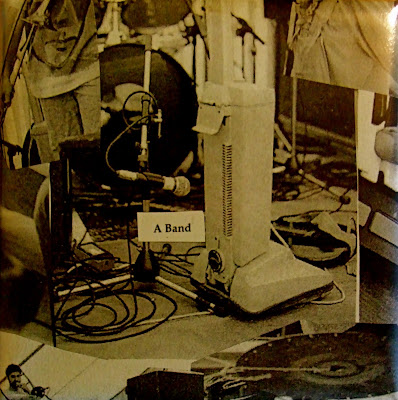 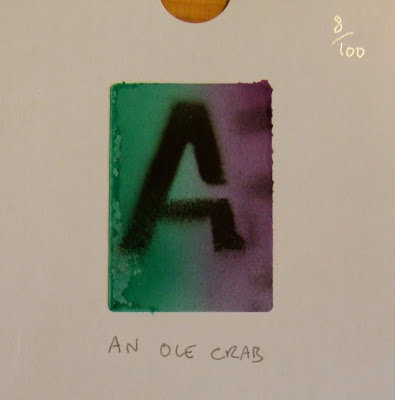 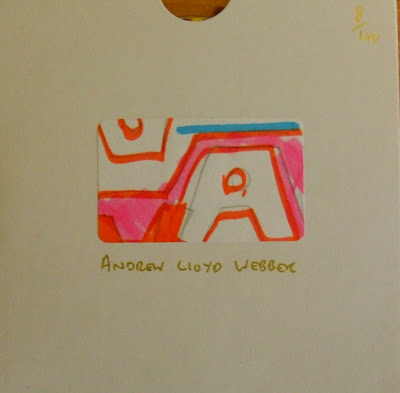 Apollolaan recordings are very proud to present this 2xcdr release from the band sometimes known as A Band, or The A Band or on this release Andrew Lloyd Webber & An Ole Crab.
This release is limited to 100 hand numbered copies.

David Keenan has this to say about the release on the Volcanic Tongue website:
"Major archival unearthing from one of the key transitional free music groupings to come out of the UK underground. The A Band were an amorphous collective of pranksters, musicians, improvisers, stand-up comics, fire-breathers and English eccentrics who played free music well outside of any idiomatic styles or previously codified modes, thus building a bridge from the experiments of previous generations the SME, AMM and – particularly – Terry Day’s People Band to the kind of liberated rock-informed explorations of freeform instigated by Vibracathedral Orchestra, Richard Youngs and countless contemporary underground operatives. Both Youngs and Neil Campbell were on/off members of the group alongside key players like Stewart Walden, Jim Plaistow, Stream Angel and Sticky Foster. This excellent archival double disc set (over the years there have been scattered documents released by labels like Siltbreeze and Chocolate Monk) presents two complete and previously unreleased performances. One disc is drawn from a gig at The Adelphi, Leeds, on 24th July 1992 and features the line-up of Jim, Neil, Stream, Stewart, Andrea and Dave, while the other is a recording of their appearance at Nottingham’s Rock & Reggae Festival on 25th July 1992 with a line-up of Jim, Stream, Tim, Andy, Jon, Stewart, Dave and Matt Marks. The set is packaged in a hard plastic slipcase, with both discs packaged in card folders decorated by stickers donated by members of the band. It also comes with a collage of photos from the Nottingham gig and a poster for the event. An amazing document from a time when ‘noise’ was joyous, eccentric, liberating, celebratory and genuinely subversive. Highly recommended."

“A bit more description on these recordings and the events behind them:
on the friday we drove in a van up to Leeds, and there was some kind of fault with the engine, which meant we drove slower and slower as we progressed - the last nine miles took us an hour! As a result, we arrived at the venue and went onstage immediately, no time to relax beforehand. I think (if memory serves) Tim missed the gig so that he could get the van fixed in time for our return home. We drove back to Nottingham, where we were due to be first band onstage at the annual Rock & Reggae Festival
Andrew Lloyd Webber is about 43 minutes long, and has some good sounds throughout. An Ole Crab is about 28 minutes, near the start I'm reading out some found letters and notes, and it ends with us being attacked by a chainsaw-wielding man who I never saw before or afterwards, followed by Stream and me duetting on a children song, with live sound effects (it sounds like the tape slows down, but we sang it that way)”
Stewart


The recordings are from the original Master tape, and other than the gigs themselves are to be heard here for the first time.
Artwork was provided for this release by way of stickers sent to apollolaan by "members" of the a band both on this recording and from the 2000's re-incarnation of A activity. The package also comes with collaged photos from The An Ole Crab gig and a copy of the poster from the gig itself.

ANCIENT BRIEF HISTORY
The A-Band started up because Vince Earimal (saxophone player) had a gig and wanted a backing band. It was formed and it began with the letter A (Arachnid). Then there was another concert and a different band was formed, again beginning with A. This continued to happen, until someone realised that a band (infact A Band) had formed, due to no obvious membership requirements and a total lack of practicing (theoretically due to aesthetic reasons but more due to monetary factors of rehersal space) it was a come-and-go hap-hazard line-up and sound. Releasing numerous self released tapes, a 7" record and a few of albums (although mostly released post-humously.) They disbanded circa 1994 due to no particular reason.

RE-History
In early 2007, due to interest arousal via a documentary (which is mid production) and a new myspace page (thanks to veteran Stewart Keith (nee Treize, Bizzaro and Walden)) the has been a burst of one-off gigs in Warrington, London and Nottingham respectively, announcing the rebirth of The A Band.

If you'd like to know more then this brilliantly written article by David Keenan is is well worth checking out http://www.thewire.co.uk/articles/2263/

Here is a review from Foxy Digitalis...
"Often songs and albums are untitled, but rarely are bands. The tribe of British pranksters making caffeinated and clamorous early-90s free improve did have a name, it just happened to change for every performance. Because their multiple monikers each began with an A, the group came to be called The A Band. The Nottingham-based collective’s name shifting emphasized the A Band’s dedication to unfixed musical regulations, embodied by a revolving band lineup, a motley and expansive discography, and undeterred quest to turn anything and everything into an instrument. Anarchic improv bedlam never felt so good.

Apollolaan has collected two unreleased A Band shows from 1992: a recording from July 24th at The Adelphi in Leeds (performing as Andrew Lloyd Weber), and a manic set the following day at Nottingham’s Rock & Reggae Festival as An Ole Crab. (An Ole Crab being Barcelona spelled backwards; the 92 Olympics opened there that day.) The packaging is beyond tremendous: two discs in paper sleeves with stickers provided by the band, pages of collaged photos and a flyer from the festival. The package is solid and substantial, even heavy, and the cover shows a vacuum cleaner sitting beside a microphone. You become intrigued.

“Andrew Lloyd Weber” begins with grinding metal increasing in volume and giving way to vaguely Floydian keyboard riffage. Layers upon layers of crashing cymbals, bass undulations, scraped metal, and tribal drumming compete for attention. The ensemble slowly gathers a full head of steam, and pretty soon are a hurricane tearing through a sawmill, whipping up a colossal maelstrom of ramshackle sounds and dragging blasted circuits into the abyss. After several craggy peaks, the improvisation cools to a viscous ooze and unravels into alarm clocks and whispers.

“An Ole Crab” is shorter and scrappier than “Weber.” There are more voices and more drums. Nebulous percussive hits occasionally align into a simple tribal beat streaked with rips of trombone. Halfway in, feedback monopolized the speakers and textures become sharp and abrasive. The mosaic concludes with what sounds like a Casio being tossed into a chipper. Five or six people clap and someone in the crowd asks, “Who were they then?” Hilarious conclusion. I’m glad the crowd noise made its way onto the end of the recording. Perhaps An Ole Crab were still performing?

The A Band were Free Jazz minus Jazz, Panic music sans satyr, and Industrial without the end of civilization. At times recalling Sun Ra, electric Miles Davis, and Einsturzende Neubauten, they were still utterly unique, proving that noise can be a sloppy sandbox free from overt politicizing or heavy overthinking. Change your name every night, let whoever in your band, and wring sound out of whatever’s handy. The intricate and freewheeling soundscapes heard on this stellar collection are what happens when nearly all conceptual parameters are out the window.

Now for the bad news- “Andrew Lloyd Weber/An Ole Crab” was limited to 100 copies and is already sold out. But fortunately The A Band are back together playing shows. I’m hoping they continue to stir it up for a long time. 8/10 -- Mike Pursley" 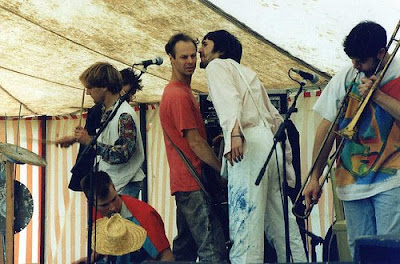