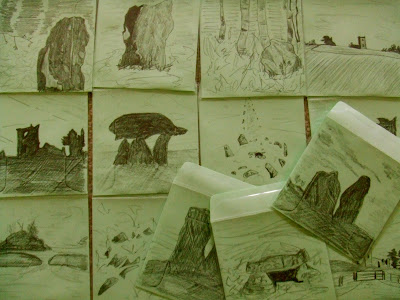 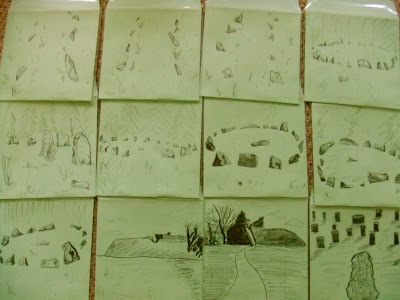 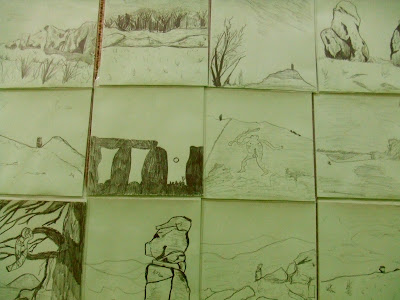 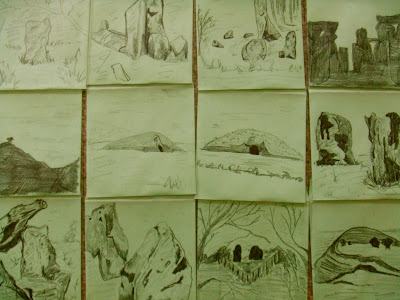 Our latest release on apollolaan is "Metrognomes" by Book of Shadows.

Book of Shadows began in 1999 when ST 37 founder Carlton Crutcher and his wife Sharon began making magickal, experimental recordings. Since then Book of Shadows has played live and recorded constantly with numerous Austin Texas musicians. Book of Shadows has released over a dozen cd's, the lineup on the Metrognomes release is Sharon on vocals, Carlton on synth and Jason Zenmoth on guitar and electronics. Book of Shadows aims to combine the best aspects of experimental, psychedelic and pagan music, enjoy!
This 5 track cdr has a playing time of just under an hour and twenty minutes of Pure brilliance by this Austin Texas band.
Each copy comes with individually hand drawn artwork, in a numbered edition of just 50 copies. 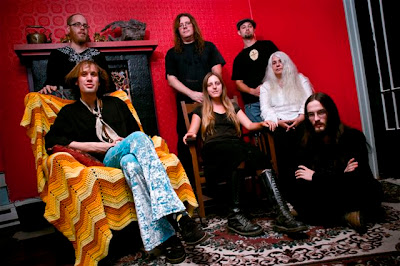 "If you've heard the band before, then you know what to expect -- lots of minimalist drone created by keyboards, electronics, guitars, and Sharon Crutcher's otherworldly vocalizing (an interstellar drone instrument in its own right). This five-track release features a stripped-down version of the band, with just the core of Carlton Crutcher (keyboards), Sharon Crutcher (vocals), and Jason Zenmoth (guitar, electronics) providing the unparalleled flow of sound. The sound, while hardly a radical departure from the band's previous output, is nevertheless a bit less layered and ephemeral than before, especially on the title track... but the sound is still plenty, plenty psychedelic and deeply rooted in a spiritual mysticism. This is meditative music, a cloud of sound made for drifting and dreaming, and as such the sound ebbs and flows in its intensity without ever becoming overbearing. There's also a lot of heavy guitar action on this album, especially on the title track, where it's swaddled in acres of reverb and provides a nice counterpoint to the free-flowing river of drone. The drone is heavier and filled with warbling keyboards in "Twoedit Gnos," where the ethereal vocals ride over a wave-like ocean of shimmering drone, along with violin-like sounds that show up later in the piece. "Ong Ones" is one of the more obviously experimental pieces, with the drone in the background as strange noises generated by guitar and keyboards, then processed through efx gadgets, rattle and reverberate in the foreground. (A barking dog also shows up about eleven minutes into the somnolent drone-o-thon, although whether that's by design or accident is hard to tell.) The sound of "Ifev Gons" is thicker but more mellow, with rippling keyboard lines swallowed by a tremelo-happy drone and more mysterious noises floating in and out of the mix. The final track, "Gnrooufs," is built around a tinny-sounding piano track accompanied by a high-pitched drone and more of Sharon's ethereal drone vocals; it's less extraterrestrial than the rest of the album, but every bit as strange and psychedelic. This release continues their tradition of putting out fine, enigmatic drone epics that combine the sound of experimental music with the shamanistic feel of pagan traditions. The bad news is that this album -- issued in a limited run of fifty copies, each with its own unique hand-drawn artwork -- is already sold out. Maybe you'll get lucky and find it available for download on one of the psych / drone blogs...."
theonetruedeadangel.blogspot.com

" A decent conclusion of this section of reviews is three very limited releases by Book of Shadows, the productive combo of improvisers well known to those who carefully follow the Terrascope reviews. The music is mostly drone-ish, with guitars and keyboards building beautiful fields of ghostly and gothic sounds over which voices freely floats, drifting in various directions, soft or intense, sometimes as a part of the drone, sometimes up in front.. The tunes are all long and hypnotic and they put you into moods of stillness. With careless listening you might think it’s a bit monotone, but as with all vital monotony there are loads of details. This band has huge experiences of performing their music live and it’s mostly all improvised with very few exceptions. For me their music is like a good painting; when you first knock it up on the wall you look at it very distinct every time you pass, but after a while it will become more of a part of the whole wall, as well as the room environment, than just a painting. Book of Shadows’ music work in the same way for me. When playing it first it’s a bit obvious and notable, than it more and more becomes a part of the room, like an aural painting and when it ends you realize something’s missing and you have to put it on again."
Terrascope